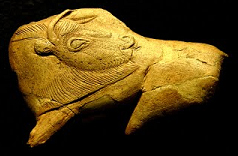 We have seen until now the glacial epoch fine arts that happened in Europe.
This time, we consider the meaning of the glacial arts. 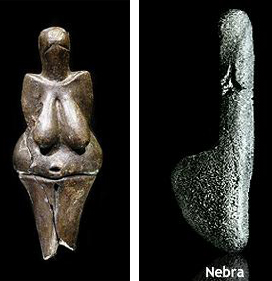 1.       What was drawn and sculpted
Although horse, bison and deer were drawn plenty, fish and reindeer that could be caught easily were not drawn little. A natural scene also was not drawn. The mammoth that could be caught rarely, the pregnant female, and the animal of one pair of male and female animals are conspicuous in there. Although the scene where peoples hunted animals were not drawn, an animal in which bow and spear were stuck, and something like trap or cage were drawn.
Male design was simple thing of two points by the circle and another was symbolization of genitals. As for female design, shape of a body was emphasized, and relief in cave and sculpture was only female images. Other sculptures of whole body were half beast and half man or personalized thing.
Else, There are hand paintings that lacked any fingers and simple and various figures. It seems that the numbers were recorded by the condition of lacked finger in hand paintings, and engraved lines recorded the calendar too. Some simple figures were broadly common.

＜  transition of cave pictures: lift side, hyena, France,32000 years ago. right side, bison, Spain,14500 years ago ＞
2.        Technique of drawing and sculpting
The pictorial expression began from the monochromatic outline of a line, and progressed to the line drawing with inflection.
Subsequently, the details like hair were drawn additionally, the contrasting density was expressed in connection with widely painting, and then it progressed to polychromatic drawing from 2-color drawing.
Although most animal images were drawn by the side view, only the hoof was drawn by the front view. This will be because the hoof that shows health condition was thought as important. This brings my mind back to the mural painting of ancient Egypt.
Paints were devised very much and obtained the multiple colors that mixes various minerals with oil and fats, and is liquid. In Altamira, the charcoal that obtains black was selected carefully by the wooden kind. In Lascaux, the bone of the animal was burned at 400 degrees, and calcite was mixed with it, and also it became hot at 1000 times, and used it.
3． others
There is many cave painting in the inner part of the caves that not get any sunlight. There is it in the entrance used as the place of the life. Moreover, the mural painting is drawn also on the cave in which it does not live. The animal of the cave paintings was almost painted-over picture, and probably, the peoples in those days didn’t put importance on good-looking picture.
In 20,000 years, although cave painting came to have a rich expression, Venus statue of end-stage half became a simple design. Although this Venus statue image had a commonality by the side view, it reflected the diversity of the region.

＜ hand painting in cave: France ,32000 years ago. Flute: made of bone, German, about 35000 years ago. ＞
What changed?
1.        have magical thinking ： They expressed things that they wished and accept a value through paintings and statue, and people present their wishes to it.
2.        manipulated number and technology :  They began to record a notation or a calendar by combining. Technology was developed similarly.
3.      created and place importance on formality : Although fine arts change with the times and  reflect the diversity of the region, have a commonality.
4.      cherished these with groups : They taught pictures technique, left cave painting to the specific person, and occasionally performed the festival.
5.       moved broadly and trafficked with the long distance ： We can guess from a stone tool, the similarity of design with fine arts, and stone tool material. 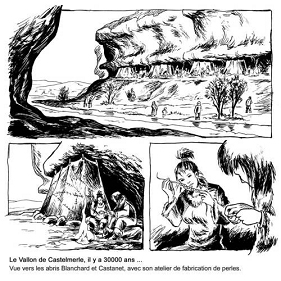 ＜ People lived by rock shadow at 30,000 years ago ＞
What happened to human beings?
Cro-Magnon man began half-settled life with the group more than a family in arctic cold, in and around cave.
Two reasons made it possible was that they had to hunt much reindeer that do seasonal migration by group, and coldness enabled preservation of a lot of meat.
If it is hot, meat will rot. If it is cold, a reindeer will disappear and their heavy winter clothing becomes useless.
They were able to make the dress that matches their body by the needle made from a bone.
The intercommunion with a family, a group, and other groups influenced each other, and greatly developed language, child-rearing, and technology. Furthermore, culture and a sense of values (religion, art) were produced.